The Thrall[1] is a common enemy encountered in Prince of Persia: The Two Thrones.

"Thralls are akin to walking siege weapons. Possessing legendary stamina prior to being transformed, these former members of the House of the Hedgehog are now nearly unstoppable. From their spiked armor and wicked weapons of war, they serve as the Vizier's elite guard. Persistence and endurance are often required to defeat them. They posses no obvious weaknesses. One's best chance for success lies with gaining the initiative. Catching these creatures unaware allows a skilled warrior to execute them before they have a chance to engage in direct combat."
—Official Booklet Description[1]

These Sand Creatures are encountered later in the Prince's quest, and replace the Scythian Swordsman for a time. They appear as tall men, covered in thick spiky armor, and with a deadly mace or a powerful sword as their weapon.

Thrall only attack the Prince if they see him. They patrol certain areas around Babylon, and can deliver major damage if hit by any of their strikes.

It is best to dispatch Thralls with a Speed kill (which takes more than one move to kill them). If speed kills cannot be performed, use combos and they will die soon. Block when needed. If possible, it is best to throw or knock them them off a ledge.

Weapons Thrall wield vary depending on the enemy. Some Thralls will carry a sword and wear armor with a helmet that appears to be in a lion or a tiger design. Another will be wielding a mace, bare chested and wearing a helmet. 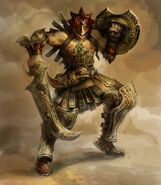 Thrall Artwork
Add a photo to this gallery

Retrieved from "https://princeofpersia.fandom.com/wiki/Thrall_(The_Two_Thrones)?oldid=28325"
Community content is available under CC-BY-SA unless otherwise noted.