The Generals[1] (Klompa, Mahasti, and the Twin Warriors) are four of the strongest warriors in the Scythian forces and the Vizier's greatest allies during the events of Prince of Persia: The Two Thrones.[2] All three encountered in the game are bosses that require varying tactics to beat.

"Among the Scythians the Vizier encountered a few select individuals who he elevated to leadership positions, for he alone could not manage such a large force. Each general represents a different attribute --- strength, agility, and cunning --- and work to train the Viziers forces in each aspect. When the Vizier unleashes the Sands of Time, the lieutenants are exposed to the Sand directly, as opposed to the Vizier transforming them. The result is a tremendous magnification of their already significant abilities."
—Official Booklet Description[1]

During the siege of Babylon, all five of the antagonists and the Prince are tainted or transformed by the Sands of Time. Klompa loses his identity; though he grew stronger, he is reduced to a giant, grotesque creature with little ability to generate critical thought.[2]

The Twin Warriors become more coordinated and have more strength than before; their ability to fight as unit increased. Mahasti became unhinged by the powers granted by the Sands of Time and became more reckless in her endeavor to recruit more members for the House of the Cat, transforming women she enslaved and captured into Sand Creatures against their will.[2] 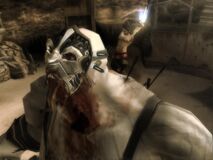 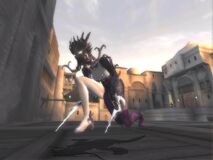 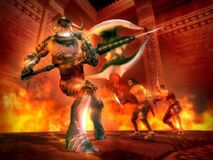 Retrieved from "https://princeofpersia.fandom.com/wiki/The_Generals?oldid=28323"
Community content is available under CC-BY-SA unless otherwise noted.