Speed Kill allows you to kill a maximum of two enemies when your primary weapon (the Dagger of Time) flares white. In Rival Swords, the screen turns black and white/sepia instead of the weapon flaring white. This allows the player to kill an enemy without them fighting back, and, as the name implies, kills a lot faster than normal fighting.

To initiate a Speed Kill, sneak up to an enemy without being seen by either him or anyone else who might be around him. Keep approaching until the screen deteriorates around the edges, then press a certain button - which, again, differs based on the console. The Dagger of Time is not needed to perform the Speed Kill, but you do need a weapon i.e. the Fish Gutter.

The number of times the Speed Kill button must be pressed depends on the difficulty of the enemy, normally only needing one for Sand Archers, two for Sand Guards, three for Sand Gate Guards and five for Thralls. You can pull it off under multiple circumstances, by getting behind them, above them using a chain or ledge, and below them.

Sometimes, jumping off an angled shutter without the enemy seeing you can also result in a Speed Kill. Double Speed Kills are only available for Sand Guards, and the Speed Kill button needs to be pressed four times, and theoretically Sand Archers, where the button may only be needed to be pressed two times. After the Speed Kill has begun, it can be stopped only by the one you are using it on, and that too only if you have missed the timing.

The Dark Prince has a different way to Speed Kill. Instead of using the primary weapon, like the Dagger of Time, he uses the Daggertail to strangle the victim. To do this, sneak onto the victim in the same way you would as the Prince, and when the screen deteriorates, press the required button to initiate a Speed Kill. Then, press the required button as fast as you can repeatedly. The Dark Prince's Speed Kill can only be used from above or behind, and multiple Speed Kills are not possible. The player has to initiate twice to kill two enemies regardless of how close they are.

Speed Kills are used for three out of the four bosses. In the first boss, Klompa, Speed Kills are used to stab out his eyes, so he cannot see you when you run up to him to hit him with your weapons. You then run up his back to finish him off, both of which is done in one Speed Kill sequence. Fighting against Mahasti does not need Speed Kills hence they are not used. Speed Kills against Twin Warriors are the only things which can cause major damage to both even though used only twice during the fight.

Some people kill all the enemies around the Sand Gate with Speed Kills, as apart from the Sand Gate Guardians, there are a number of Sand Guards or Thralls with them. They do not have portal swords. Sometimes they are not directly next to the Sand Gate, but above, around the corner, or behind a wall next to, the Sand Gate. Killing all the enemies takes a lot of patience to view the surrounding area first, then look at the patrolling of the Guardians and warriors and then proceed with caution. Often the player is spotted, and has to reverse time to kill all of them using only Speed Kills.

Only twice in the game are there more than one Sand Gate Guardian. That is the last and second last Sand Gates. The second last portal is near the Royal Workshop. One Sand Gate Guardian is on the ground level and with him are two thralls. The other guardian is on a nearby platform. Jump from the beam to the chain (directly above one thrall) and move down. Just as the Sand Gate Guard turns around press the Speed Kill button, finish off the Thrall, and move behind the ledge nearby before the guardian sees you. Climb up and you can wall run and speed kill the guardian on the platform(the landscape camera shows a good window).

Move to the ledge nearby and vertical wall run and jump to the top of the platform wall. Jump to the chain and move down. Speed kill the thrall again when the guardian turns away. Move behind the screen which is to the left and climb up. Jump to beam and finish off the guardian. The last portal is in the Hanging Gardens.The most easy choice is to Speed Kill the two Sand Gate Guardians, and then fight with the Thrall.

Most of the other enemies cannot be Speed Killed. This is due to the fact that they are come out of their hiding places only when the Prince arrives at a certain location. However, these enemies are normally very easily finished off, using a few combo moves. Such enemies are: 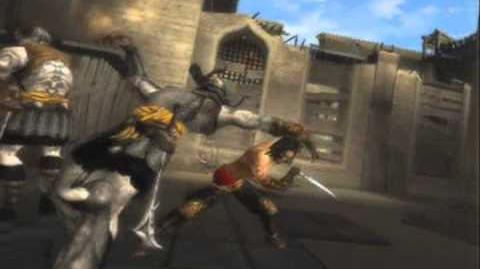 Retrieved from "https://princeofpersia.fandom.com/wiki/Speed_Kill?oldid=25742"
Community content is available under CC-BY-SA unless otherwise noted.