This article, Skeleton, is a stub. This section of the article is incomplete, and contains information, but requires more before it can be considered complete. You can help Prince of Persia Wiki by expanding it.

This article (Skeleton), or a section of this article, does not meet wiki standards. Please repair this article so that it meets our standard. Add links, categories and images as well as expanding on information. See the talk page for more info..

Skeletons are a common enemy throughout the original Prince of Persia trilogy.

The skeletons of the desert island caves are the long deceased inhabitants of the island, who took shelter in the caves to escape a storm. The ones who fell victim to their own traps and those who died of starvation are now haunting the caves and guard the treasures there[1].

In the first Prince of Persia game, Skeletons act like Palace Guards and have swords to kill you with. Unlike the Guards, however, they cannot usually be harmed by your sword. Instead, they either move backwards a bit, so you can knock them into a pit or trap, or fall into a pile of bones for a while, letting you pass by.

One is first encountered early in the game, where you need to push it into a pit to kill it. Many are seen in the level after the Prince is sent into the depths of the earth by his doppelganger in the Super Nintendo port.

The Gold Skeleton is an enemy fought at the end of one level in the Super Nintendo version, guarding the exit. unlike the other bags of bones you face, this one has a health meter and can be killed like any Palace Guard, and acts as more of a boss fight than an enemy.

The golden skeleton boss may be older and weaker than the other skeletons, or may actually be made of gold, explaining why he is able to be killed with the sword and the others aren't.

Skeleton in Prince of Persia 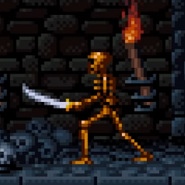 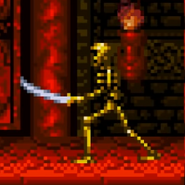 Skeletons in Shadow and the Flame Android remake

Retrieved from "https://princeofpersia.fandom.com/wiki/Skeleton?oldid=29294"
Community content is available under CC-BY-SA unless otherwise noted.