Silhouettes are a common enemy encountered in Prince of Persia: Warrior Within.

"The Empress has experimented not only with corrupting life on the island, but creating it as well. An outer coating of shadow-like material enables the Silhouette to streak from place to place, deftly avoiding most conventional attacks. Such an unnatural creature must be met with equally unnatural force. It will take everything the Prince has to defeat these monsters."
—Official Booklet Description[1]

The Silhouettes are a byproduct of the Empress of Time's magic. They were spawned most likely by the fusing of shadows and the Sands of Time. They now dwell in shadowy areas all over the Island of Time. They have the ability to move very swiftly, streaking from place to place, making it difficult for the Prince to harm them.[2]

Upon retreating a short distance, they retaliate by throwing dangerous daggers. One weakness they have however is that they can instantly be killed by a well-aimed projectile. They taunt and mock the Prince while he fights them.They are dressed in red with black robes and will throw daggers at the Prince every time he approaches them.[2]

When approaching a group of Silhouettes, begin to roll and jump around dramatically and never run straight, as they will throw daggers at the Prince to try and slow him down. Upon reaching the group, continue to roll and jump around the area to avoid being trapped in between them; Silhouettes can move very quickly and surround the Prince in seconds. Focus on one enemy at a time, and only perform jump attacks to avoid being hit by the thrown Knives of the others.

Once the number of enemies begins to fall, you will notice how weak they are when alone, and should be able to finish the rest of fairly quickly using the same technique. You can stay on the offense, since the Silhouettes do not block the Princes strikes. 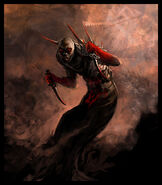 Retrieved from "https://princeofpersia.fandom.com/wiki/Silhouette?oldid=28371"
Community content is available under CC-BY-SA unless otherwise noted.