Shadow Man is a shadow clone of the Prince who is created when the Prince jumps through a magical mirror that was created by Jaffar. Shadow Man encounters Prince several times. Once the Shadow Man drinks a potion before Prince can get to it, and once he shuts a gate, forcing Prince to drop down. On their final meeting the Prince chose to fight him, but soon realized they were life-linked as the Prince was cut when he hit Shadow Man. The Prince then sheaths his sword and steps into the Shadow Man, fusing them back together[5].

Shadow Man later returns when Prince escapes from Persia, due do Jaffar's curse. Prince gets an ability to separate from Shadow Man. After Prince finds the Blue Flame, the only way to obtain it is for Prince to die. Shadow Man then emerges and takes the flame by engulfing itself in the blue flame. Once Shadow Man enters back into Prince, the Prince is resurrected, making the Bird-Headed Guards worship him. Shadow Man wielding the Blue Flame is the one who defeats Jaffar for the last time, burning him into cinders.[6].

Shadow Man is a boss in Prince of Persia. He however is different from other enemies, as he can not be harmed, and hitting him will only damage the playable Prince. The only way to defeat him is to walk into him, merging the Prince and the Shadow Man[5].

In Prince of Persia 2: The Shadow and the Flame Shadow Man is a playable character. To turn into Shadow Man the player must rapidly turn left and right multiple times. The cost of turning into a Shadow Man is loosing seven life bottles permanently. Shadow Man in Prince of Persia 2 is impervious to damage, even falling damage. He can walk over loose floor and trapdoors without triggering them. He also can walk through iron gates. Only traps and obstacles that harm Shadow Man are made from stone. The enemies can't see Shadow Man. Shadow Man is needed to defeat the final boss, Jaffar, as he is the one wielding the Blue Flame[6]. 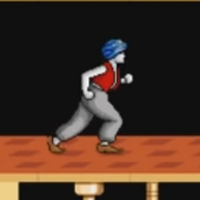 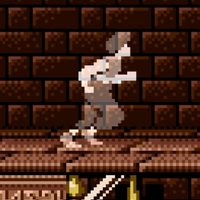 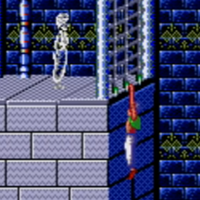 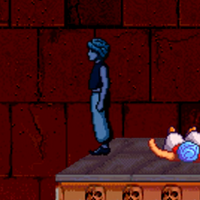 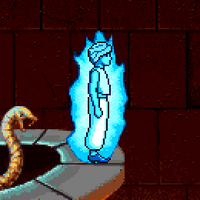 Shadow Man with the Blue Flame

Retrieved from "https://princeofpersia.fandom.com/wiki/Shadow_Man?oldid=30554"
Community content is available under CC-BY-SA unless otherwise noted.