The following article, Prince of Persia (1989), uses partial or complete Creative Commons Licensed content from Wikipedia. Information can be remixed or replaced at any time in future edits.

Prince of Persia (commonly abbreviated as POP) is a multi-platform game, originally developed by Jordan Mechner October 3, 1989 for the Apple II. Prince of Persia was widely seen as a great leap forward in the quality of animation seen in computer games. The game managed to surprise and captivate players despite being, at first glance, repetitive. This was achieved by interspersing intelligent puzzles and deadly traps all along the path the Prince had to take to complete the game.

The Prince is an orphan, living on the streets. One day, he scales the palace walls to catch a glimpse of the Princess, whose beauty is like the "moonrise in the heavens". His feelings are reciprocated by the Princess, despite their class differences.

The game starts with the Sultan of Persia being called away to war in a foreign land. Sensing opportunity, the evil Vizier Jaffar seizes the throne for himself. The Prince is imprisoned, since Jaffar has designs on the Princess. The Princess is also imprisoned and she is given a choice with an hour to decide: marry Jaffar or die. The Prince has an hour to complete the game by saving the Princess and killing Jaffar.

The twist is that the game is played in real time, so the Prince must quickly complete the quest without breaks. On some platforms it is possible to save the game at the start of each level, though the time limit still applies. The only way to lose the game is by letting the time expire. If the Prince is killed, the game will restart from the beginning of the level or in some levels, at a mid-way checkpoint.

The game also includes a power bar. Medium falls, blue potions, being hit by falling platforms, and sword hits take one bottle off the power bar, while major falls, being hit unarmed, falling or running on spikes and blades, kill the Prince instantly. The Prince can increase the number of bottles in his power bar by drinking larger red potions, usually hidden or in dangerous places, while the regular-sized Red magic potions restore one life each time they are consumed. There is also a green potion that made the Prince light-weight and one that made the screen flip around, depending on the level.

In the fourth level, the Prince is forced to jump through a magic mirror that tears his soul apart from him, always leaving him with just one full bottle. The soul, depicted as a semi-transparent copy of the Prince, leaves the screen and will appear in two of the last levels. In level 6, when the Prince jumps and catches on a platform to climb up, his soul closes the gate before him forcing him to drop to next level. In level 12, with the sword drawn, fighting the Prince. Since the prince cannot hurt his soul without getting hurt as well, he has to sheathe his weapon and rejoin his soul by walking into it. This also adds an extra bottle to the prince's power bar. In the game's last level, the Prince has to fight and defeat Jaffar, a master swordsman. After defeating Jaffar, the game ends by showing the Prince reunited with the Princess and all is well.

The main objective of the player is to complete the game within one hour. The player must lead the game protagonist out of a dungeon and into a tower. Doing so requires bypassing traps and fighting hostile swordsmen. The game consists of twelve stages (or levels). To complete a game, all twelve stages must be completed in one session. A game session may be saved and resumed at a later time only after level 3.

The player has a health indicator that consists of a series of small red triangles. The player starts with three. Each time he is damaged (cut by sword, fallen from two floors of heights or hit by a falling rock), the player loses one of these indicators. There are small jars of red potion scattered throughout the game that restore one health indicator. There are also large jars of red potion that increase the maximum number of health indicators by one. If the player's health is reduced to zero, the protagonist dies. Subsequently, the game is restarted from the beginning of the stage in which the protagonist died but the timer will not reset to that point, effectively constituting a time penalty. There is no counter for the number of lives but dying too many times will eventually leave the player with very little time to complete the game.

There are three types of traps that the player must bypass: Spike traps, deep pits (three or more levels deep) and guillotines. Getting caught or falling into each results in the instant death of the protagonist. In addition, there are gates that can be raised for a short period of time by having the protagonist stand on the activation trigger. The player must pass through the gates while they are open, avoiding locking triggers. Sometimes, there are various traps between an unlock trigger and a gate.

Hostile swordsmen (Jaffar and his guards) are yet another obstacle. The player has to obtain a sword in the first stage, which he can use to fight these adversaries. The protagonist's sword maneuvers are limited: He can advance, back off, slash or parry. Enemy swordsmen also have a health indicator similar to that of the protagonist. Killing them involves slashing them until their health indicator is depleted.

Mechner used a process called rotoscoping, in which he studied many hours of film of his younger brother David - a traceur - running and jumping in white clothes, to ensure that all the movements looked just right. Also unusual was the method of combat: protagonist and enemies fought with swords, not projectile weapons, as was the case in most contemporary games. Mechner has said that when he started programming, the first ten minutes of Raiders of the Lost Ark had been one of the main inspirations for the character's acrobatic responses in a dangerous environment.

The game is set in Ancient Persia. As a child, Jordan Mechner had enjoyed the tales from the The Book of One Thousand and One Nights and the settings for this game are changed to Persia. Prince of Persia also influenced a sub-genre, which imitated the sprawling non-scrolling levels, fluid animation, and control style pioneered by Prince.

Ports to other Systems

Prince of Persia was originally released for the Apple II in 1989. One year later it was ported to other personal computers such as the Amiga, the Atari ST, and the PC (DOS). In 1992, when the home console market was growing steadily, versions for the Master System, Sega Mega-CD, NES, and Game Boy were released, as well as a version with enhanced artwork for the Apple Macintosh. A version for the SNES was released in 1992. A Mega Drive/Genesis version followed in 1993. A port for the Turbo Duo also appeared in 1993, using the Super CD-ROM format. Another port was for the Game Boy Color six years later, in 1999.

Java versions for mobile devices appeared in the early 2000s. For the revival title, Prince of Persia: The Sands of Time, the Macintosh version was put in to be unlocked by finding a secret area (The GameCube version of the game also has a second method of unlocking the original game by finding three switches in the Game Boy Advance game, with the GBA being connected to the GameCube). The first level of the game also turned into a secret 3D minigame in The Sands of Time.

The SAM Coupé version, released in 1992, is unique because it was programmed unofficially using graphics painstakingly copied pixel by pixel from paused frames of the Amiga version and only shown to Domark (the UK distributors of Prince of Persia) for potential release near completion. Although the computer had a very small user base and no other mainstream support, the release was allowed because of the very high quality of the conversion and the fact that it would incur almost no further development costs. Due to its independently produced status and the fact that the work was done almost entirely by one individual, Chris White, this version of Prince of Persia has several unique bugs.

The Sega Mega-CD and Turbo Duo versions used the CD format to incorporate animated cutscenes with voice tracks and CD Audio soundtracks. The games both had graphics that seem to be based on the Macintosh version, where the Prince had a turban and colored clothing.

The SNES version is also unique. Aside from graphic and aural enhancements, the game has twenty levels instead of the original's thirteen; the original levels that remained had some extra rooms or different routes. Also, there are boss battles, some of which are not the typical sword fighters, and that involves not only sword fighting but dodging as well. The player was also given two hours to rescue the Princess (all other versions only gave you one). This version was ported and developed by NCS and published by Konami in America and Europe.

References in Other Media

In 1992, a famous Russian author Victor Pelevin wrote a short story called "Prince of Central Planning" which shows a Soviet bureaucratic organization in which everyone plays computer games all the time (using American computers, which were in very short supply in the Soviet Union at the end of 1980s). Nobody really works but actually lives in the world of the game he is playing at the moment. The protagonist Alexander (or Sasha as this name shortened in Russian) lives in the world of Prince of Persia (i.e., he encounters red potions, guardians, spikes and blades in the streets and on the subway during his daily life). The story was a heavy satire on Soviet bureaucracy and resembles stories of Philip K. Dick.

The plot of the Disney 1992 film Aladdin has many similarities with Prince of Persia. In the film, the evil vizier Jafar tries to force the princess Jasmine (of the mythical city of Agrabah) to marry him, and Aladdin tries to save her. Towards the end of the film, Jafar also traps the princess inside a giant hourglass, similar to the one the evil vizier Jaffar from Prince of Persia summons forth at the beginning of the game to indicate the time in which she has to make her decision to marry him or die. 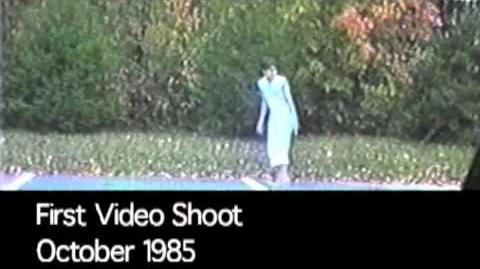 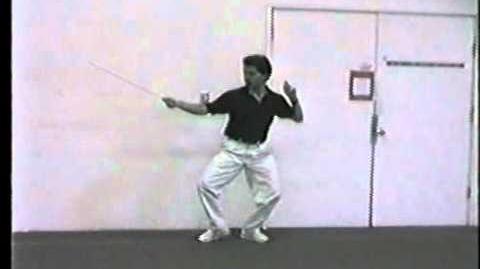 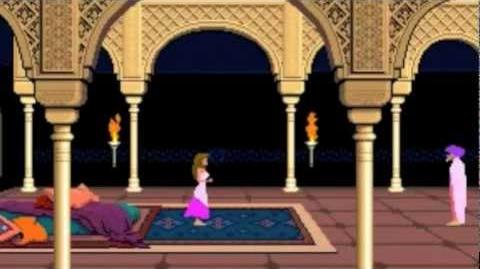 Making of Prince of Persia 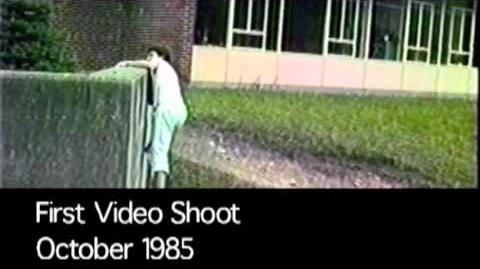 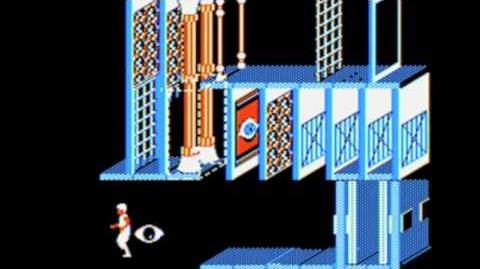 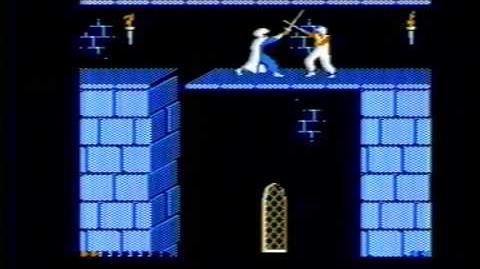 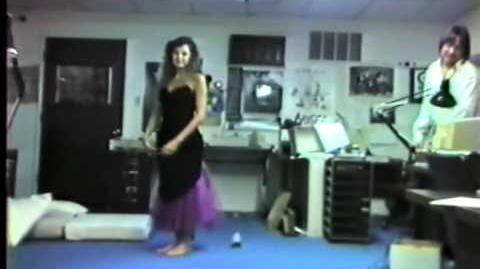 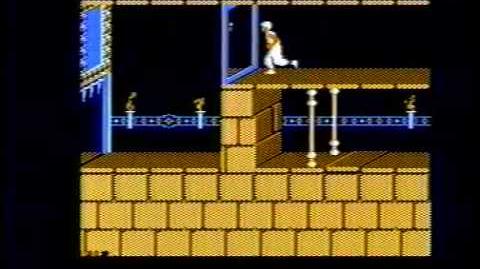 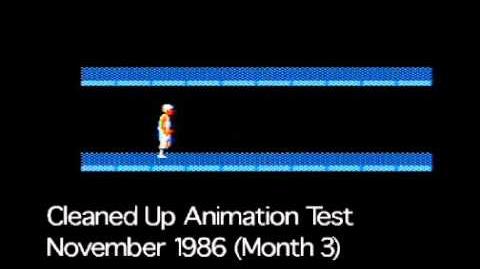 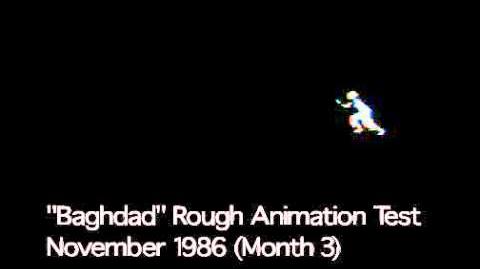 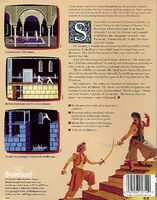