This article, Mechanical Tower, is a stub. This section of the article is incomplete, and contains information, but requires more before it can be considered complete. You can help Prince of Persia Wiki by expanding it.

"I have never seen such a large clockwork mechanism before, it is as if the entire tower is some tremendous machine. But for what purpose, I wonder?"
—The Prince[1]

The Mechanical Tower is a secondary building located within the Fortress of Time.

The Mechanical Tower is established within the Fortress of Time and was accessible to the left of the Central Hall. The tower is constructed of two parts: The Mechanical Pit, and the Activation Room.

During his journey on the Island of Time, the Prince was instructed to activate the fortress's towers to unlock the throne room.

The Prince maneuvered his way through the past and present state of the Mechanical Tower using Time Portals. While in the Mechanical Pit, the Prince encounters the Sand Wraith again. When he reached the heart of the activation room, he centered the three master gears. After rotating a switch, the gears began turning and the tower becomes activated. This causes one of the beames sealing the throne room to unlock.

The Prince returns to the tower once he learns about the mask of the wraith. He enters the tower through a secret passage from the fortress's library. The Prince arrives in the tower a third time as the sand wraith, this time he entered from the Mystic Caves. A Brute sneaks up behind him and tosses him into a hole in the wall. The Prince remains unconscious for an unknown time, and when he awakens, he begins to question if he is "too late".[1]

The state of the Mechanical Tower in the past

The state of the Mechanical Tower in the present day 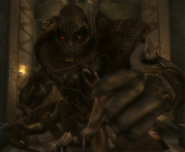 Retrieved from "https://princeofpersia.fandom.com/wiki/Mechanical_Tower?oldid=29380"
Community content is available under CC-BY-SA unless otherwise noted.