Horse is a special character introduced in Prince of Persia 2: The Shadow and the Flame.

The horse, described to be a dazzling white stallion, has been enchanted by ancient and powerful magic, to be only ridden by the true King of Basra[1]. The horse even has an ability to fly. When not mounted by the King, the horse transforms into a marble statue, mimicking the color of nearby stones[2].

After the young nobleman conquered Basra, and declared himself the new King of Basra, he tried to mount the horse, but the enchantment held, and the horse would not come to life. The man ordered the Witch who helped conquer the city to activate the horse. The witch however realized just from a glance, that the enchantment on the horse is too strong. So the horse was left in the ruins[1].

15 years later[1], a young man jumped onto the horse and the horse came to life. The young man turned out to be the son of the late King of Basra and his wife. The Prince rode the horse to the Temple of Fire and later back to Persia. After the Prince had defeated the evil Jaffar, he took the Princess for a ride in the clouds[2]. 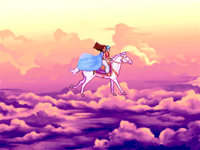 Retrieved from "https://princeofpersia.fandom.com/wiki/Horse?oldid=29983"
Community content is available under CC-BY-SA unless otherwise noted.