Sand Creatures appear to be simple-minded, zombie-like creatures that attack humans, like Prince and Farah, on sight. They are found in locations specific either to their profession or otherwise noted. For example, Harem Sand Creatures are encountered in the halls of Azad and appear throughout the palace.[1]

Their counterparts, the Metal Chain Sand Creatures are first encountered in the Sultan's Harem. In one instance he fought his father, Sharaman, in the reception hall where he died. The Prince also fought animals which were once a part of the Sultan of Azad's zoo. These creatures and countless others seem to be manipulated by the Vizier.[1] 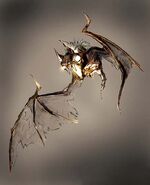 Retrieved from "https://princeofpersia.fandom.com/wiki/Enemies_in_The_Sands_of_Time?oldid=28337"
Community content is available under CC-BY-SA unless otherwise noted.