Prince of Persia Wiki
Register
Don't have an account?
Sign In
Advertisement
in: Weapons, Sands of Time Weapons, Two Thrones Weapons,
and 5 more

The Dagger of Time is an artifact and weapon linked to the Sands of Time.

"More than a weapon, the Dagger of Time is the only container besides the Hourglass that is strong enough to hold the Sands of Time. Whoever wields the Dagger is granted the power to control Time, by using up the Sands within."
—Instructional Manual[2]

The Dagger of Time enables the wielder to reverse, stop, slow, and use various other time-related powers.[3] The mechanism used to activate the Dagger is a blue and gold accented button located in the center of the Dagger's hilt. It, like the Medallion and Staff of Time, protects its wielder from the effects of the Sands of Time. Doubling as a weapon, the Dagger of Time is the only weapon that can harm and recapture Sand Creatures.

According to the Vizier, the Dagger of Time and many of the other artifacts accompanying it came from the Island of Time.[5] It is largely assumed that all artifacts of time were created by Kaileena. The Dagger's reason for being is never revealed. Prior to the events of The Sands of Time, it and the Hourglass of Time were taken from the Island of Time by the Maharajah and his Vizier. A "spoil of war", the Dagger was placed on an altar in the heart of his treasure vault.

The Sands of Time

The Maharajah's Vizier betrayed him to the Persians in order to claim the Dagger and Hourglass for himself. However, the Prince was the first to enter the treasure vault and claimed the Dagger for his own. The Vizier could do nothing, as Sharaman refused to take his son's prize. When Persians presented the Sands to the Sultan of Azad, the Vizier manipulated the Prince into releasing the Sands, preying on his sense of pride.

When the Sands are released, the Dagger protects the Prince from being transformed into a Sand Creature. He later used the dagger to trigger the "Grand Rewind" and return the Sands to the Hourglass. Time was reversed to the point before his father's army attacked India, but he maintained possession of the Dagger regardless. He returned the Dagger to the Maharajah's daughter, Princess Farah and asked her to "guard it well".

Because of the Prince's efforts on the Island of Time, history was changed, and the Vizier was never killed. Motivated by dreams he "received" from the Dagger, the Vizier killed the Maharajah and stole the Dagger for his own. After conquering India and Babylon, he then killed Kaileena with the Dagger. Recreating the Sands of Time, he absorbs them into the dagger and stabs himself with the Dagger. Through its power, the Vizier finally realized his dream : to become immortal.

The Prince reclaims the discarded Dagger afterwards, and uses it to defeat the transformed Vizier, stabbing him in the chest. With the Vizier dead, he returns the Dagger back to the spirit of Kaileena. She then departs from their world with Dagger to prevent anyone else from using its powers.

The Sands of Time 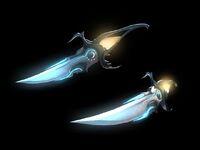 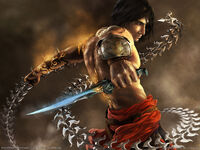 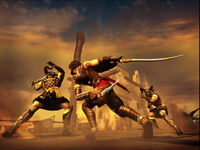 The Dagger of Time in Assassin's Creed Odyssey