This article, Chargers, is a stub. This section of the article is incomplete, and contains information, but requires more before it can be considered complete. You can help Prince of Persia Wiki by expanding it.

The Charger is a common enemy in Prince of Persia: The Forgotten Sands.

A creation of the Sand Army, it was summoned by Ratash after he and his army were released by Malik. The creature was able to destroy a tower simply by ramming at it with its body.

Some time after that, the Prince defeated the Charger. There are also similar enemies to the Charger, which have the same powers, but this is the first, and strongest of them. Though humanoid in appearance, its behavior is similar to a rhino, making grunts and tossing its head occasionally. 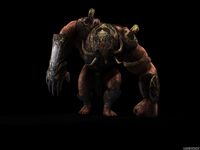 Retrieved from "https://princeofpersia.fandom.com/wiki/Chargers?oldid=29498"
Community content is available under CC-BY-SA unless otherwise noted.