This article does not cite any references or sources. Please help improve this article by adding citations to reliable sources. Unsourced material may be challenged and removed..

Babylon is the capital of Persia and home of King Sharaman and his son, the Prince of Persia. Babylon appears in Warrior Within and The Two Thrones, the latter placing the entire story in Babylon.

As depicted by the game, this is a place of contrasts, from the very poor neighborhoods to the luxurious palace. Buildings in Babylon are usually several stories high and this was explicitly stated by the producers to have been so in order for the player to have a sense of vertigo when jumping on the rooftops.

One major event takes place in Babylon, in the third game: the Vizier kills Kaileena here and releases the Sands of Time unto the inhabitants. The Prince will have to fight corrupted Scythians and Hunter Hounds to clear his way through the city. In the end, when the Prince killed the Vizier and freed Kaileena's soul, it is assumed that the Prince and his true love, Farah, become King and Queen over Babylon and Persia.

there were none here to observe this gruesome spectacle. A huge circular grate at the center of the dusty ground might serve as a sluice for the blood of the many victims that had no doubt met their fate here. Gates on the arena floor were firmly shut, and the walls spiked with obstacles and traps. It had never been part of the design of this place that any should escape the killing floor.

Babylon, surrounded by smoke and being attacked by the Vizier's army Babylon during the fights in The Two Thrones

The Babylon Tower, place of the final battle

Wonderful view from one of the Babylon´s rooftops 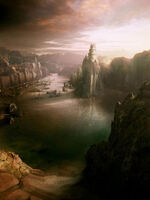 The harbor of Babylon during the events of The Two Thrones

The environment the Prince encounters within the game, just before the final fight

Babylon
Add a photo to this gallery

Retrieved from "https://princeofpersia.fandom.com/wiki/Babylon?oldid=29474"
Community content is available under CC-BY-SA unless otherwise noted.