Soldiers of Ahriman are a enemy type in Prince of Persia.

"These enemies are men and women who have been turned into corrupt monsters by Ahriman. soulless, merciless, they exist to do one thing…serve Ahriman."
—instruction manual[2]

The soldiers of Ahriman are men and women who were corrupted by Ahriman and were persuaded to side with the God of Darkness when Elika's father, the Mourning King destroyed the Tree of Life releasing the four corrupted.[1]

The soldiers of Ahriman are formless, but often take humanoid shapes when combating the Prince. Ahriman's soldiers can wield weapons such as swords and shields.[1]

The Prince can combat Ahriman's soldiers with basic melee combat, using his long sword and gauntlet. As a weaker enemy type, the Prince can fight the soldiers with the help of Elika. Other tactics that can be used against, includes pushing them over the edge of the arena. 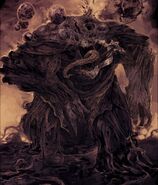 Retrieved from "https://princeofpersia.fandom.com/wiki/Ahriman%27s_Soldiers?oldid=29308"
Community content is available under CC-BY-SA unless otherwise noted.